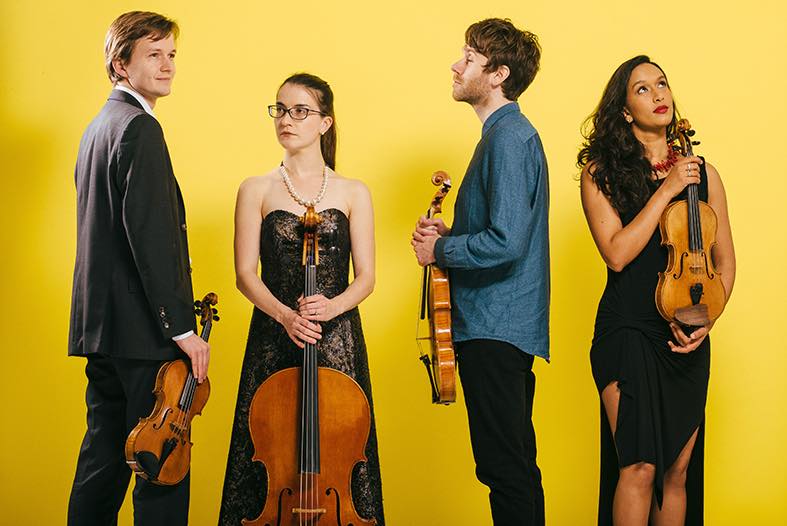 The Ligeti Quartet have been at the forefront of modern and contemporary music since their formation in 2010. They have established a reputation as one of the UK’s leading ensembles, breaking new ground through innovative programming and championing of today’s most exciting composers and artists.
Having played at landmark venues around the world including Carnegie Hall, Wigmore Hall, Purcell Room, Barbican Hall, Kings Place they also regularly escape the stage to appear at museums, galleries, theatres, pubs, an IMAX Theatre, a fishing boat, and on iceberg sculptures as part of a Greenpeace campaign. International festivals include the Osterfestival Tirol (Austria), Pablo Casals Festival (France), Incubate Festival (Netherlands), Musik 21 Nachwuchsfestival (Germany) and ‘HellHot!’ New Music Festival (Hong Kong). In February 2016 they were broadcast live on BBC Radio 3’s In Tune.
They have commissioned many new works and have collaborated with artists from all types of musical backgrounds including Anna Meredith, Elliot Galvin, Kerry Andrew (Juice Vocal Ensemble, You Are Wolf), Laura Jurd, Meilyr Jones, Neil Hannon (The Divine Comedy), Seb Rochford (Polar Bear), Shabaka Hutchings (Sons of Kemet, The Comet is Coming), Shed 7 and Submotion Orchestra. They are currently working on a long-term project with Ernst von Siemens prize-winning composer Christian Mason to create a series of ‘Songbooks’ for string quartet, based on overtone singing traditions from around the world.
The Quartet are passionate about supporting emerging composers and taking new music to diverse audiences. As Quartet in Residence at the University of Sheffield for 2015-­17 and St John’s Smith Square Young Artists 2015-16, they regularly lead composition workshops, and undertake education and community outreach work. They have recently been appointed Ensemble in Residence at Cambridge University and are City Music Foundation Artists 2016-18.
Ligeti Quartet are grateful to have received grants from the Britten­-Pears Foundation, Hinrichsen Foundation, RVW Trust, and St John’s Smith Square. They have also been generously supported by Help Musicians UK, the Tillett Trust, and the Zetland Foundation to further their training with the European Chamber Music Academy (ECMA), under the tutelage of Hatto Beyerle of the Alban Berg Quartet. The quartet comprises graduates from the Royal Academy of Music, Royal College of Music and the University of Oxford and have been coached by members of the Arditti, Chilingirian, and Lindsay Quartets. They have been mentored by the Kronos Quartet at the Barbican Centre (2012) and Carnegie Hall (April 2016).