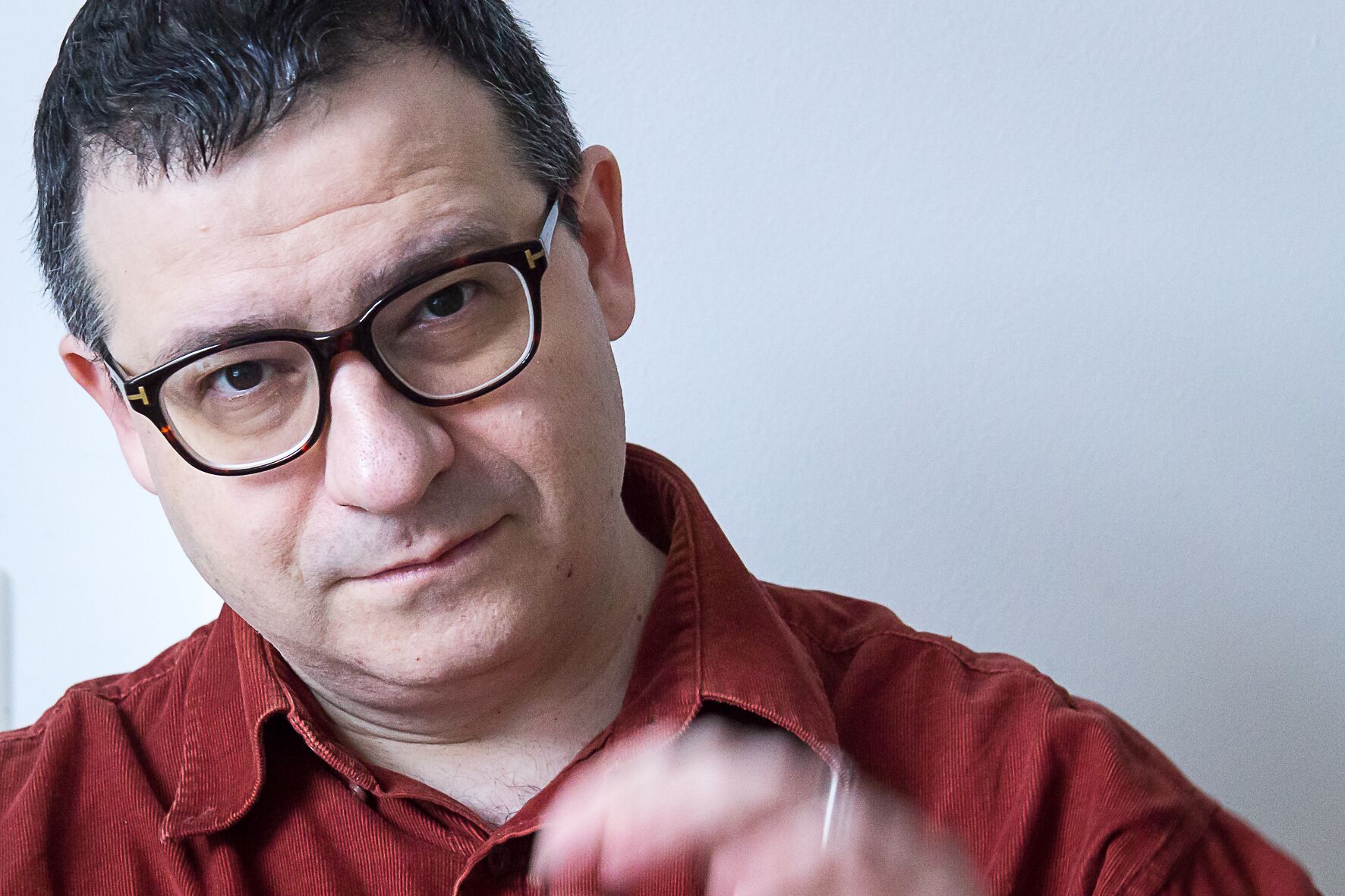 Born in St. Petersburg (Leningrad), Russia. Graduated in 1995 from the Rimski-Korsakov State Conservatoire where studied under Boris Tishchenko. In 1992-97 attended the Russian Seminars for Young Composers at Ivanovo, under Sergei Berinsky. Winner of IRCAM Reading Panel’97. In 1998 studied at IRCAM.

2000-2012 – artistic leader of eNsemble, the only contemporary music group in St.Petersburg. Accomplished numerous musical projects, among them “Pythian Games” (annual composers’ competition with anonymous performance and public voting) and “Step Aleft” (competition for young composers). In total eNsemble has commissioned and premiered about a hundred works by new Russian composers.

Since 2005 – performs as vocalist/narrator, with a dozen of works by Russian composers dedicated to him. As a performer of his own works and works by other composers collaborated with such artists as Teodor Currentzis, Reinbert de Leeuw, Pierre Roullier, Roland Kluttig, Fedor Lednev.

Filanovsky is proteistic by nature, feeling himself as a Stravinsky-like creative type. He experiences strong tension to documentary texts and generative poetry (Scompositio, Words and Spaces, bzdmn, He made forty) as well as Russian nonsense verses (A Certain Quantity of Conversations, Janko Krul Albanskaj, Lesvet Setmy). From other side, he feels the spirit of deconstruction and plays with performing habits (We Can’t perform It, Schmozart, Seemphony, play.list). Last years he elaborates vast monotimbral compositions with fuzzy logic as main formal principle (Collectivision, Der Lauf der Dinge, La Machine Fleuve – together with Arno Fabre).
What colleagues and press say

“Filanovsky is a separate composers’ category. Academicism is his biggest weapon and at the same time his obstacle and hostile environment, and his idée fixe. From the entire StRes-group he is the most Russian composer. I consider him an heir to Shostakovich. If there had been no Shostakovich, Filanovsky would have been very different. And vice versa, if Shostakovich were alive, he would probably do the same as Filanovsky.”
Theodor Kurentzis, conductor

“…the most important part of Filanovsky’s method is his work with the form. It seems to have nothing comparable in contemporary Russian music, but there is somewhat of an ancestor, Stravinsky with his famous constructing in parallelisms. Famous formulae are usually unlucky, since everybody knows them, but deep down nobody understands their meaning. This formula is lucky, because Filanovsky does understand. And acts in a different manner.”
Anton Svetlichny, composer and theoretician

“Boris and I have known each other for 10 years. And for all those years he surprised me with his ability to be different every time. He is an ideal embodiment of the stravinskian kind of creator, a constant seeker and, even closer to Stravinsky, a constant finder. Filanovsky is a master of context games. He often employs composition models, which seem already adopted, long ago or only recently. However, he brings them in an exceptionally individual environment where these models begin to transform, change their meanings and turn into something else. On the whole, he is a composer of paradoxes: in his case permuting the summands of a sum always changes the value of the sum.”
Dmitry Kourliandsky, composer

“The opera Three Four is definitely not for those peoplee who just want to have a good time: one has to make some efforts to get closer to the piece. All obstacles and traps set by the author constitute sort of a defence against ingrate listeners and outsiders. On the opposite, those who took the trouble were rewarded with a feeling of unique unity with the piece that is incredibly dazzling in spite of its bristling character.”
Vladislav Moiseyev, Russian Reporter

“However the premiere of the opera Three Four did bring a certain bright aesthetic and emotional experience. The new opera of Filanovsky turned out to be a reflection about human life, with its sorrowful predeterminacy and finiteness. A certain experience of self-understanding, very intimate and, in spite of author’s will, very emotional for every listener.”
Gyulyara Sadykh-zade, Fontanka.ru

“One of Filanovsky’s central creative principles is “to be someone different in each work”. Yet in every composition, he is unmistakably himself: evincing a sonic realism that critically reflects on social, human or musical issues and that relies on methods of deconstruction and negation as starting points for sonic innovation. This compositional aesthetic corresponds with his conviction that the most important impetus for creativity lies in recognizing and overcoming limits.”
Gisela Nauck, German musicologist (www.berliner-kuenstlerprogramm.de)

“In “bzdmn” Boris Filanovsky achieved a high level of reflection about the dilemma between constant indirectness of art and immediateness of social need. Filanovsky used texts of homeless people and put in the center of the artistic statement shabby and unauthentic things: music and words are a coat that brings warmth in need, and it is not important whether this coat is your own. Between the texts of homeless people one finds the Sermon on the Mount read aloud by Filanovsky himself without vowels. By means of this formalistic trick speech turns into stammer, mutter and asphixy which transform indirectness of art into immediateness that cannot be ignored.”
Jan Brachmann, Frankfurter Allgemeine Zeitung, 27.03.2009

“All Russian pieces performed during the [Maerzmusic] festival come to a sad end. The most so to speak Russian piece was composed by Boris Filanovsky. This is a travesty of holy lies of the orthodox church and nationalism flourishing amid social need, a travesty equal in its grotesque, poignancy and bright orchestration to The Nose of Shostakovich.”
Stefan Amzoll, Der Freitag, 02.04.2009